It’s week 2 of our CSMA Club #NewThings challenge (read last week’s Visit a new place here), and the task was to play a new game. Now, we have a lot of games, but N’s not really fussed about trying any of them. Sometimes if his cousin wants to play, we might get one out and set it up, but then N gets bored, and wanders off. So I had to think of a different game, probably more active so he could jump around while doing it.

I decided to finally get round to making the bean bags from the worn out jeans I’ve been stockpiling. I wear through jeans really quickly (while the OH’s last for years – excluding the ones he uses for work obviously), so had chopped off the pockets thinking I’d make simple bean bags. I also had some dried peas knocking around, bought for that reason, so then I just had to locate some large strong needles and thread.

Jeans pockets. Cut tight around the sides and bottom of the pockets, at the top of the opening cut a little further away (1cm-ish) so you can sew a flap over
Thread – I used embroidery thread to help it stand out, and it was also thicker. But any strong thread would do
Dried lentils, peas or rice to fill. I thought my box of dried peas would fill lots of bean bags but only filled 2 so a big pack of lentils might be better. I used rice for the third bean bag.

1. For each jean pocket, fold the flap over the top of the pocket like an envelope and start stitching it closed. Backstitch does the job well, although I did a botch job of whatever stitch I fancied.
2. Stop halfway, and pour in the filling. You want it reasonably full, but not solid.
3. Fold over the rest of the flap and stitch closed.

You could decorate the denim before stitching closed – applique on letters, numbers, pictures etc, but I was too lazy to do that. I do have more jeans to cut up so maybe I’ll fancy some up a bit with the next ones I make.

I did have a look on Pinterest to see what I could find. With more than one person you could have relay races, like you do at primary school where you pick up the bean bags from the floor and run back to put them in your bucket. Or you can cut holes in boxes or set up buckets to toss the bean bag into.

I decided to do a slight variation. I debated initially setting up a ‘target’ on the grass with rope, concentric circles around the bullseye and then throw the bean bags in. But I had no rope and couldn’t see it staying still on the grass. Plus with a dog roaming round, you never know when she’ll run off with the game. So using one of N’s big boxes we made a target with strips of duck tape (what a waste of my gorgeous tape, but otherwise I only had masking tape which we wouldn’t see against the box). I could have got out the paints and painted on some areas, but thought that would take a bit of time to dry (and be messy).

To the strips I added some numbers for scoring. Then a paper plate at the end was stuck on with glue dots as the main target. And it was time to play.

I knew having a Peppa Pig plate would do the trick and get N interested in playing. Of course he didn’t want to play by the rules I set and throw from the correct end. Instead he wanted to ride on his ride on truck, round to the plate and just place the bean bags on it. Hmm, not quite playing the game N!

I showed him what to do, and he did attempt a few throws, but still from the easy end, and standing really close. I suppose if that gives him a bit of confidence and helps him practice his throwing then fair enough.

He did find it funny when I had a go, and the bean bags kept jumping off the plate and off the end of the box. It’s great to hear young children giggling away, such a happy sound.

So not an entirely successful game attempt, but having the bean bags and target box means that we can play inside or out, and use the bean bags for other games. I might even use them as a calming down tool – making N walk round quietly with one balanced on his head would be an interesting method of getting him to calm down before bedtime.

What bean bags games do you know or remember from your childhood? Have you upcycled jeans into anything interesting? 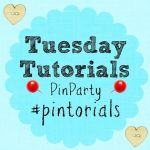 Disclosure: This is our second challenge entry as a CSMA Club #NewThings ambassador.

This site uses Akismet to reduce spam. Learn how your comment data is processed.

Love my best nine for this year. It's bright, colo

It's seemed like a long run up to Christmas from w

I made a wreath for the first time this year. A wo